You can skip forward, backward, or jump to a menu of all the blog posts in the hop using the links I have at the top and bottom of this post (“previous blog,” “master list,” and “next blog.”)

AND NOW…THE SEVEN OF CUPS!

I made a 7 of Cups, ya’ll! It’s the one on the far right, below. I wrote more below about this holiday and the making of this card to commemorate it (and, let’s face it, to get over my fear of this card.) If you want to start with my last blog post about the making of this same card, click here. If you aren’t really familiar with this card at all yet, I suggest you read Biddy Tarot’s summary here. 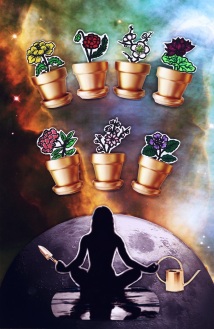 This isn’t the final version of my 7 of Cups card — the title needs to be added — but the image is what’s being used for the 2017 International Tarot Day Deck. 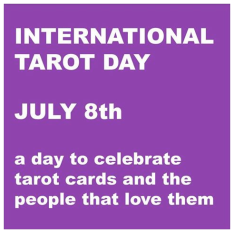 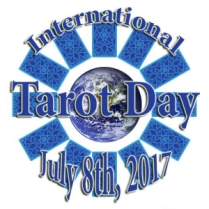 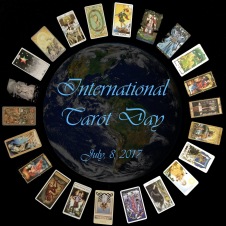 Today is the first annual “International Tarot Day,” and it just occurred to me: here in the USA (where I am located), July 8th = 7/8 (like the 78 cards in a Tarot deck)! Cool!

But how many others around the world will see it that way?

I decided to look it up, and according to a 2013 article from The Guardian asking why Americans do this wacky month/day thing, only the USA and parts of Kenya will relate to July 8th as “7/8.” Oh well. I still got a kick out of it, and this version of a world-wide day to celebrate Tarot was founded by an American, so what the heck? Happy 7/8!

As Tarot holidays go, this is brand new. There was already an annual “World Tarot Day” (in May), but apparently it was founded/branded by a specific group of Tarot professionals, whereas International Tarot Day emerged anonymously from the depths of Tarot love on Facebook and belongs to everyone. I first heard about it when Tarot Nerds member Ferguson Bree organized a blog hop to celebrate the occasion. I requested to be a part of it, because why not??

The day before the blog hop assignments were made, I drew the 7 of Cups reversed as my daily card from my Rider Waite Smith (RWS) deck. This card had been stalking me a bit, and had always been a challenging one for me to interpret confidently. There are so many associated keywords! Here are some of the keywords I found for this card — illusion, fantasies, wishful thinking, delusion, variety, choices/options, too many choices, diversification, compartmentalization, over-analyzing, judgment, discernment, daydreaming, imagination, temptation, debauch, addiction, corruption, dissipation, sentiment, ego, spirit, inner-self, reflection, observation, awareness, recollection, manifestation…

YIKES! Talk about too many choices! Anyway, when I drew that reversed 7 of Cups, I said to myself, knowing that the Universe has quite a sense of humor, “Watch THIS be the card they assign me for the blog hop.” AND — of course — it was.

That being settled, I figured one way of making this card go away was to make my own version of the card (= facing my stalker). And since I was making a card anyway, I offered to submit my 7 of Cups to the commemorative International Tarot Day deck being organized by Tarot Nerd and all around Tarot master Janet Boyer, IF they still needed a 7 of Cups. AND — of course — it turned out to be one of only 2 (out of 78!) cards they had not already assigned. So I was in, and “in for it,” because now it was really time to face this card and make it mine.

(By the way, thanks to Sandra Wong in the Tarot Learning Group on Facebook for showing me this “Card Stalker” Tarot Spread — available for anyone else in this predicament! Maybe I’ll try a modified version of it later to see if I got all the lessons I was supposed to.)

ANYWAY, LET’S JUST SUMMARIZE MY PROCESS of “facing this card” by saying that in the course of researching and creating this card (and now, writing this blog post), I have embodied nearly every one of these keywords. If only “technical difficulties” were one of the keywords, I’d have hit all of them.

To understand the card better, I looked at as many non-RWS card images as I could find online, to get a sense of all the ways this card was represented visually — because maybe some version other than the Rider Waite Smith would make more sense to me?? Or at least help me figure out what “angle” to take for envisioning my own card.

Here are just a few examples from decks I own (please note my later apology to the many folks who posted card images for me that I haven’t used yet!): 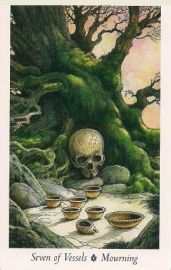 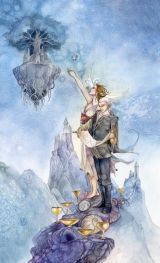 Okay, here I see the concepts of excess, daydreaming, mourning (?? maybe because when you choose one thing you necessarily give up other things?), and fantasy/illusion. There are many more cards out there that are good examples of the other keywords — more about that later.)

But eventually the concept of “choices” emerged as the keyword that could be a kind of cornerstone for my approach to this card. When I chose that keyword to focus on, all the others could be understood in relation to that one. WHEW! So then the question became, how do I choose to represent “choices?!”

Well, obviously choices were made, but how I decided on a gardening metaphor — and why it’s set in space — is a bit unclear to me at this point. Did I write about it already in that last blog post?? I don’t know. I don’t have time to check now. Possibly because I’m starting to panic about what else I should be doing right now besides writing this post! Facts are, I’m supposed to be packing for a trip RIGHT AT THIS MOMENT, and I just remembered my kids have to be at the dentist’s office in less than 2 hours, and I haven’t been to the gym yet which I need to remedy, and meanwhile I have asked the members of several Tarot groups on Facebook to show me their 7 of Cups cards (so I could make this blog post some extremely well-researched dissertation on the meaning of this card) and of course I have no time to prepare a dissertation now before this post needs to be ready to publish.

SO, in a move to simplify my life that the 7 of Cups would be very proud of, let me just show you two versions of the card I made, then link to the blog post I already did about the version I submitted to Janet (done!), then wrap this up and take care of my family responsibilities.

The version I submitted for the card deck has the trowel/spade, but the one on the right, with the pruning shears, was another choice I considered. And agonized over. And made the mistake of asking for opinions about. ETC. “Over-analyzing?” Yes. That’s my modus operandi. Yes, hello again, STALKER. I get it. I’m working on it, okay?

The version with the pruners might have said more about the fact that it’s not just what we choose to invest in that matters, but what we choose to do less of, or stop altogether, that makes us who we are, and makes the world we inhabit/co-create what it is. But the version with the trowel was the crowd favorite (amongst the crowd members I asked), and I wasn’t entirely happy with the color of the pruning shears piece of the collage, so “trowel” was the winner.

Just for fun, here are some other pics of the card as I worked through my choices. (Why yes, that is my preferred way of saying “over-analyzed everything.”) 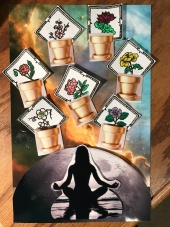 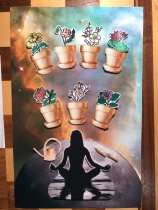 Now, to all of those *amazing* folks on Facebook in the Tarot Learning Group and Tarot Rebels group who pitched in with their own various 7 of Cups cards, I say THANK YOU, and I pledge to work on the more comprehensive database of cards + keyword nuances that I had in mind when I asked for your help. I will make a new blog post all about it after my vacation that I still need to pack for.

For now, let me invite you to check out the next Blog Hop blogger in the pack, Dauna Needom, whose blog entry on the 8 of Cups can be found at her Readings By Dauna page. (But use the “next blog” link below for quickest access.) Last time I checked, her blog post was rumored to include some tie-in between the 8 of Cups and “crystals and herbs.” Can’t wait to read it myself!

One thought on “BLOG HOP ENTRY: Let’s raise a cup (or 7) for the first ever “International Tarot Day!” Cheers!”